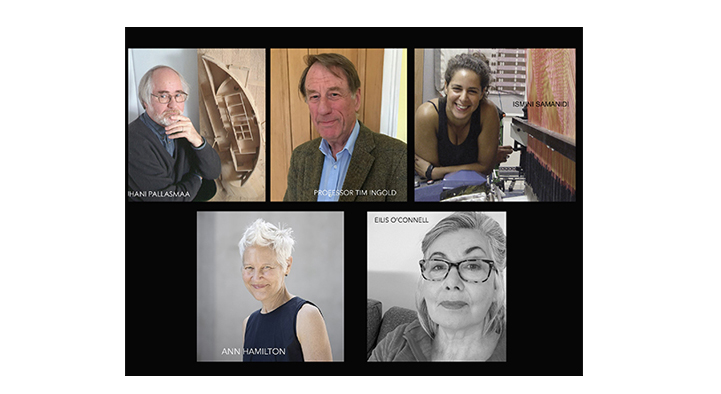 Our Symposium MAKING AND PLACE features speakers who will examine structure, landscape, and boundary, as key themes in the creation of architectural forms, art installations, and site-specific art practices.

MAKE 2023 is hosted by MTU CRAWFORD COLLEGE OF ART AND DESIGN.

PROFESSOR TIM INGOLD UK  Tim Ingold, CBE, FBA, FRSE is Professor Emeritus of Social Anthropology at the University of Aberdeen. He has carried out fieldwork among Saami and Finnish people in Lapland, and has written on environment, technology and social organisation in the circumpolar North, on animals in human society, and on human ecology and evolutionary theory. His more recent work explores environmental perception and skilled practice. Ingold’s current interests lie on the interface between anthropology, archaeology, art and architecture. Ingold is a Fellow of the British Academy and the Royal Society of Edinburgh. In 2022 he was made a CBE for services to Anthropology.

JUHANI PALLASMAA* FINLAND  Juhani Pallasmaa, architect, professor emeritus, writer, Helsinki. Design work in 1983-2022 through his office in Helsinki. Rector of the Institute of Industrial Design, Director of the Museum of Finnish Architecture, Professor and Dean of the Faculty of Architecture, Helsinki University of Technology. Several visiting professorships in the USA; teaching and lecturing in numerous universities in Europe, North and South America, Africa, Asia and Australia. Member of the Pritzker Architecture Prize Jury 2008-14.  Pallasmaa has published 70 books and 900 essays and prefaces; writings translated in 36 languages. His books include: The Embodied Image (2011), The Thinking Hand (2009), The Architecture of Image: existential space in cinema (2008) and The Eyes of the Skin (1996). He is honorary member of SAFA, AIA and RIBA, and has received six Honorary Doctorates and numerous Finnish and international awards.  *Via live ZOOM link from Helsinki.

Title of presentation: EMBODIED AND EMPATHIC IMAGINATION: intuiting experience and emotion in art and architecture.

ANN HAMILTON   USA   Ann Hamilton is a visual artist internationally recognized for her large-scale multimedia installations, public projects, print media and performance collaborations. Responsive to the contingencies of the sites where she works – cloth, texts spoken and written, animals, and people suspended or in motion – the qualities of these spaces, objects, and their atmospheres evoke an awareness of the site and the scale of the body to ask how, in a technologically extended world, the literacies of the hand and embodied knowledge  cultivate attention in a hyper distracted world of information

Hamilton received a BFA in textile design from the University of Kansas in 1979 and an MFA in sculpture from the Yale School of Art in 1985.  She has been the recipient of the National Medal of the Arts, Heinz Award, MacArthur Fellowship, and the Guggenheim Memorial Fellowship. She represented the United States in the 1991 Sao Paulo Bienal, the 1999 Venice Biennale.

ISMINI SAMANIDI  GREECE/UK  Ismini Samanidi was born in Athens and studied in London at Central Saint Martins and the Royal College of Art. She now lives and works on the South Coast of England.
Her work has been exhibited internationally with solo shows in the UK and US and was included in the Most Real Thing at the New Art Center (UK), the Hangzhou Triennial of Fiber Art (China) and Le Fil des possibles at L’Espace De L'Art Concret (France). Her work is in the permanent collection of the Victoria and Albert Museum. She was the first weaver to be invited as artist in residence at the Josef and Anni Albers Foundation. Ismini is an associate lecturer at Central Saint Martins.

EILIS O’CONNELL  IRELAND  Eilis O’Connell is one of Ireland's most internationally recognised contemporary sculptors.  Born in Derry, she studied sculpture at the Crawford School of Art, Cork and the Massachusetts College of Art, Boston, and was subsequently granted research fellowships at The British School at Rome and P.S.I. in New York. She has represented Ireland and Britain at the Venice, Paris, and São Paolo Biennales and her small sculptures were shown at the Guggenheim Museum in Venice. In 2018 her series of outdoor sculptures were exhibited at E1027, the world-renowned home designed by the Irish architect & furniture designer Eileen Gray (1878-1976) in Cap Martin, France. O'Connell's work can be found in numerous high profile public locations in London (Canary Wharf, London Docklands Development Corporation), Cardiff, Newcastle, Bristol, Wolverhampton, Southampton, Milton Keynes and in Dublin, Belfast, Dundalk, Mallow, and Cork in Ireland. Other privately commissioned works can be seen at Lismore Castle in Ireland, Chatsworth & Antony House in England and various private gardens in France and Spain.

She is a founder director of the National Sculpture Factory in Cork, a former member of the Arts Council of Ireland, a member of Aosdána, and a member of the Royal Hibernian Academy and international Fellow at the Royal Society of Sculptors in London.

A PANEL DISCUSSION WILL FOLLOW ALL 5 PRESENTATIONS THAT WILL OFFER A CHANCE FOR ALL SPEAKERS TO TAKE FURTHER QUESTIONS, AND QUESTION EACH OTHER.